Resource Rights Programme is a five years project which is being implemented in T/A Chikweo and Kawinga. The project is funded by Scottish government in partnership with Trocaire. The project is working with 2000 households (892 men 1108 women.)

The impact areas received heavy rains from 3rd March to 6th March 2021 which caused damages to houses, crops and livestock. The damages were caused due to water lodged condition due to prolonged heavy rainfall. T/A Kawinga is mostly hit especially Group Village Headman (GVH) Kawelama and Ntalika. GVH Kawelama have one evacuation centre at Kawelama full primary School and there are 2 camp sites in GVH Ntalika.

The table below shows data collected from the five GVH we are implementing Irish Aid programme;

There are 3 evacuation (Camp) sites which are in two GVHs. These are as follows:

The affected households, mostly Female headed households from all the GVHs are requesting for assistance from the well-wishers and organisation to support them to meet human basic needs and recover from the shocks. Immediately needs required; (Food items, Kitchen Utensils, Blankets, Mats, Mosquito nets, Masks, Soap) and other needs (Sweet potato vines, cassava cuttings, vegetable seeds for winter cropping, Nails and plastic sheets).

The figures of the affected households are expected to rise due to persistence of the rainfalls in the area. CADECOM will continue to conduct detailed assessment in the whole 3 T/As (Chikweo, Kawinga and Liwonde) in coordination with District disaster office.

Attached are pictures of some affected individuals and camps set-up in the communities. 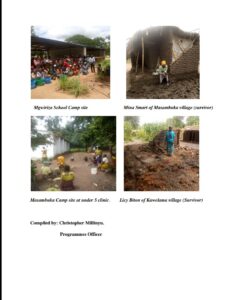