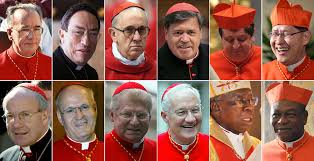 Pope Francis named fourteen new Catholic cardinals May 20, again diversifying representation in the most elite body of church prelates with selections from places as far-flung as Iraq, Pakistan and Japan and solidifying his influence on the group that will one day elect his successor. In a surprise announcement at the end of his traditional Regina Coeli prayer with crowds in St. Peter’s Square, the pontiff said he would install the new cardinals during a consistory at the Vatican June 29.