…’marry your profession to your faith’, says Bishop Stima

Members of the Association of Catholic JournaHsts (ACJ) in the country have been urged, to play a prophetic role through  responsible reporting.

The call was made last Saturday by Bishop Chairman responsible for communications at the Episcopal Conference ch of Malawi (ECM), Bishop si Montfort Stima when he or opened ACJ’s three-day annual c general meeting (AGM) at re James Chiona High School in P Blantyre. 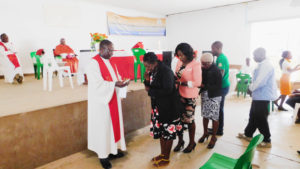 Bishop Stima, who also heads  Mangochi Diocese, reiterated that freedom of expression or press is an important index for v the health of the country.

‘Always remember that God entrusted you with a noble task—the duty of a journalist. You should always strive to protect this country by s remaining professional in your work. The church commends your ek work for tirelessly reporting on many social and spiritual work the ecclesiastical community does in Malawi,” he said.

In emphasising the power of the press, the bishop quoted St John Paul II, who said: “The g church is on your [journalists] side, whether you’re a Christian or not, you always find in the church the just e^teerh and ^ recognition of the freedom of I press.”

On his part, newly elected A.CJ president, George Kasakula hailed Catholic journalists in the country for their unity, which he attributed to the e growth of the association in the past four years.

He said the new leadership wants to make ACJ more vibrant by increasing both its financial ! status through fundraising, and membership nationwide.

During the elective AGM, the journalists were taken through various issues,including how to I grow the profession alongside their faith.

Rev. Fr. Francis Tambala Archdiocese, who iss among j those that made presentations, expounded on the’ AGM’s theme in relation to the role of ; the media.

Later, national coordinator for the Pontifical Mission Society at ECM, Father Vincent Mwakhwawa, reminded the journalists on their role in –■. Evangelism. ■