ETHIOPIA: AMECEA BISHOPS SHARE THEIR EXPERIENCE ON THE ETHIOPIAN RITE OF MASS

The Majority of Bishops from the AMECEA Region who are currently attending the 19th Plenary Assembly in Addis Ababa had for the first time in their life participated in the Eucharistic Celebrations conducted in Ethiopian Rite. The opportunity was presented to them during the opening Mass of the plenary assembly on 15th July, 2018, and it was a unique experience to them as they articulated. 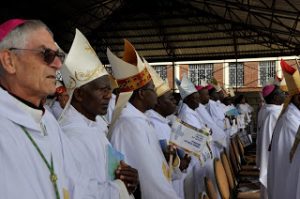 The bishops who were interviewed by AMECEA Online News, expressed the richness of the Ethiopian Rite which was so impressive, elaborate, participatory and very spiritual. Bishop Maurice Muhatia of Nakuru Diocese, Kenya said, “What captivated my attention most was the fact that the entire Mass is chanted, there is dialogue and coordination between the main celebrant, the concelebrant and the entire congregation which is a good experience.” Bishop Tombe Terrly Andli of El Obeid Diocese, Sudan added, “I was so impressed that they have kept the old traditions with songs and participation of the congregation. I admired how the old priests stood for hours and chanting the prayers without getting tired.” On his part, Bishop Virgilio Pante of Maralal Diocese, Kenya commented jokingly, “Actually I was thinking to myself, that if I am a priest or a bishop in Ethiopian Church or Orthodox Church, then I must to be a good singer yet my voice is not good enough. Probably I could have been disqualified immediately”.

Comparing the Ethiopian Rite and the Latin Rite which most of the AMECEA Bishops are familiar with, the bishops expressed that the Latin Rite is simple though it could be losing some of its spiritual aspects. 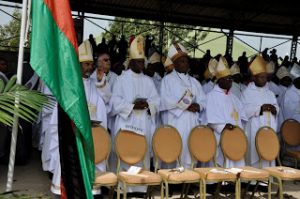 Bishop Joseph Obanyi of Kakamega Diocese, Kenya commented, “The Ethiopian Rite is rich and it seems to be preserving the heritage and the spirituality of liturgy. The Latin rite can therefore borrow some ideas from the Ethiopian Rite especially the coordination during Mass. He further explained, “I realized that every gesture, and instrument that was used seems to fit in the meaning of the liturgy. I got the better meaning of all the instruments that we use in the Latin Rite through this Ethiopian Rite”.

Archbishop Emeritus of Lusaka, Zambia Most Rev. Telesphore Mpundu added, “Being that they are Catholics, they could have adopted the Latin Rite, but they have kept and cherished their Rite and that is very good.”  On the other hand, the majority of the bishops could not follow the proceedings of the Ethiopian Rite Mass which appeared different from the Latin Mass. According to Bishop Muhatia, the Amharic that was used as the official language for Mass, was a barrier to many who do not speak or understand the language, and the liturgical book that was provided did not make it easier either.

“This was my first time to attend Mass of Ethiopian Rite. Actually, the Mass was in Amharic language which majority of us do not understand. And even though we had liturgical books which had both Amharic and English translations, it was difficult for us to follow the flow of the Liturgy,” the bishop said adding “The commentator was kind enough to help us get through the book at some important stages of the Mass but for a person who does not understand Amharic, following
the Eucharistic celebration was not easy.”

Archbishop Mpundu said, “I feel there could be some similarities with the Coptic Mass which I once attended. Even though I could not follow the liturgy well, I read everything that was in English and the second part of the liturgy of the Eucharist was a bit better, I understood partly.”

While most of the bishops observed that the Eucharistic celebration of Ethiopian Rite was longer than that of the Latin Rite, Bishop Musie Ghebreghiorghis, O.F.M. Cap. Bishop of Emdeber Diocese, Ethiopia explained that the Ethiopian Rite has added many prayers before the readings and they have maintained the old tradition of liturgy. Besides, the opening Mass was a special event which is done during big celebrations and that made it last longer than the normal celebrations.

The Eucharistic celebration began with thanks giving song praising the occasion. This was in Ge’ez language and was conducted by the Ciscitian Monks; a true reflection of the theme of the 19th AMECEA Plenary Assembly which says: Vibrant Diversity, Equal Dignity, Peaceful Unity in God in the AMECEA Region.