NAMALAKA PARISH RENEWS COVENANT WITH ST. BRENDAN PARISH OF WASHINGTON IN THE US.

It has been three years now since St. Joseph (Namalaka) Parish signed a covenant with St. Brendan Parish if Washington in the the US. Parochial delegates from St. Brendan Parish their paid their annual and official visit to Namalaka Parish in Diocese of Mangochi in Malawi from 29th July to 12 August 2018. The delegation included Mr Dales Marie, Mrs Bridgette, and Fr Wichert. The four stayed in Malawi for 2 good weeks with the intent to strengthened and share faith, stories, skills, cultures and experiences treasured by the two faith based families with a  reflection that God places each one where He wants him /her to be.

Each day has always began with a Eucharistic Celebration which normally commenced as early as 6 in the morning. On the very first day, the Brendan team was very interested to learn from the Namalaka Executive Council on how the Brendan Bowl has benefited the community and the learners from Namalaka Catholic Primary School. The discussions revealed that a different agency was interested in providing the same services to the community and hence the conclusion has been to shift the Brendan Bowl to Lungwena. The student population is about the same (2100).

Late hours of Saturday 4th August were spent visiting 3 out-churches of to the north and these being Lupetere, Lugola and Saiti, Fr. Wichert enjoyed blessing blessed the congregations wherever we stopped for audience.

Sunday 5th August was a very special day for us. Inspite being Sunday, the Brendan family was welcomed with a Holy Mass led by Fr Davie the pastor of Namalaka Parish. A Gorgeous occasion its was! Fr. Wichert said the second half of the Eucharistic prayer in Chichewa. He also gave a short speech in Chichewa. The delegation also sang a song ‘One Lord’. We also presented gifts to the parish. New vestments Albs, vessels, books and rosaries. The team then celebrated a second Mass with at the one of the furthest out churches, south of the parish – Rashidi – another joyous occasion. This created change for the team to stop at Lungwena where the Brendan Bowl will be. There the team met with a smaller group of Christians, as well as toured the school.

The third day was adventurous. Women and Youth were agenda of the day. Marie and Bridgett met with the Catholic Women’s Organisation members. Realising the responsibility the women carry in Africa and the poverty that outworks their ability to develop and be productive the team funded the group to start small business. The meeting discussed how families work and are managed. An area of more interest was establishing permanent ties between the women of Namalaka and St. Brendan. Contacts details were exchanged.

Later the youth were addressed on similar agenda. The Brendan delegation was treated to a poem, drama and game.

The whole noon was spared for tour. The team paid a courtesy visit to Namalaka and Lugola and Namalaka Health Centres. Discovery revealed there are numerous challenges in two health facilities

On 7th August was an emotional and faith filled experience day.  The whole morning and afternoon was dedicated to the weak and sick’. Frs. Davie and Wichert accompanied by Dale, Marie, Bridgett, Catechist Louis visited Marita, Eunice, Gibson, Mavis and Rosario where sacraments were were administered.

It was a moving experience at the watch of two priestly brothers serving souls.

Later in the day the Brendan delegation moved to the Bishop’s house.

As time passed everyone awaited for the emotional moment of separation. Every separation bringforth pain and discomfort for close and intimate people. When Saturday evening downed there was panting and discomfort noted in also everyone.  It was time to return to Namalaka and yes to bid farewell to our half-family members We shared our final supper with Fr. Mambo and Amos they gifted us each with a Malawi bracelet and a small print. Sunday had us anxious and a little sad for our farewell Mass. Fr. Wichert read the gospel and delivered the homily in Chichewa. The liturgical celebration was decorated with liturgical dancing, singing, dancing and ululation.

At the very end of the Eucharistic Celebration, Master, chairperson to the Namalaka parish council and Marie representing the Brendan delegation addressed the congregation. They both underlined on the importance of covenant signed between the two sister parishes. it was then a moment to renew the bilateral relationship by means of exchanging symbolic gifts and signed again the contact. St. Joseph presented to St. Brendan Parish a beautiful emblem of union as gift. It is a homemade map of the area, showing the out churches, health centres, St. Joseph.

On behalf of the parish, Fr. Davie Mambo received assorted items such as homemade baby blankets and diapers, men’s clothing for the women to sell, St. Brendan school sweatshirts and vests, wooden cars that the boy scouts made, matching shirts for football and clothes for little girls.

Concluding the visit, the two parishes signed and recommitted for another 3 years to the sister parish covenant. It was signed by both posters and chairs of the pastoral council.

A communion meal was served sealing the whole deal. Frs. Davie and Wichert were symbolic and covenantal figures throughout our say in Namalaka. 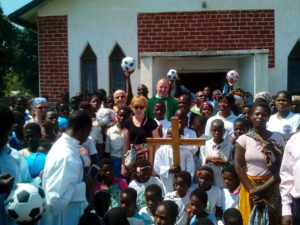 Namalaka, the Warm Heart of Diocese of Mangochi

Mangochi , the Warm Heart of Malawi

Malawi, the Warm heart of Africa